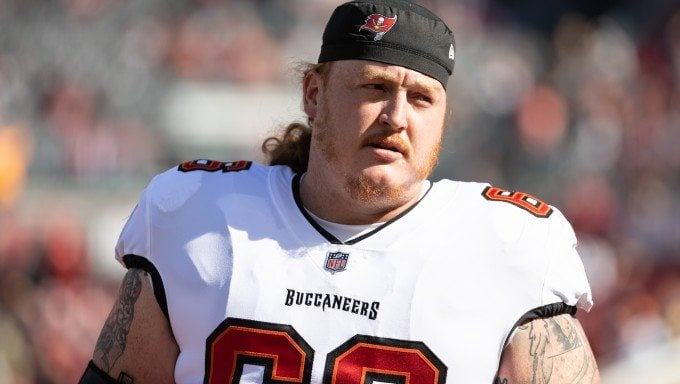 Tampa Bay Buccaneers starting center Ryan Jensen this week suffered a left knee injury that could sideline the Pro Bowler for several months, if not the entire season.

Jensen was injured during practice Thursday, creating a void on an offensive line that future Hall of Fame quarterback Tom Brady relies upon for protection.

The offense line already is depleted with the loss of left guard Ali Marpet, who retired, and right guard Alex Capa. Capa has signed a contract with the  Cincinnati Bengals.

According to the Tampa Bay Times’ Rick Stroud, Buccaneers head coach Todd Bowles said Jensen will miss “at least” a couple of months. Late in the week, physicians were evaluating the injury to determine how long he will be out.

Jensen, 31, is likely to be placed on the “physically unable to perform list.”

His value to the team is evident in his stats from last season.

During the 2021 regular season, Jensen only gave up two sacks and, according to ESPN, recorded a 93.1% pass-block win rate through the playoffs.

With Jensen probably out of action, the Buccaneers open the regular season with a Sept. 11 game at Dallas against the Cowboys. The game is scheduled to start at 8:20 p.m. ET. At Caesars Sportsbook, Tampa Bay is favored by two points.

Brady, who turns 45 on Wednesday, came back from a brief retirement this year to gear up for this 23rd NFL season. He is hoping to lead Tampa Bay to another league title, as he did in the 2020-21 season while winning the Super Bowl MVP trophy, the fifth time he won it.

With Brady at the helm, the Buccaneers posted a 13-4 record last season, losing in the playoffs to the eventual Super Bowl champion Los Angeles Rams, 30-27.

In a league filled with young stars at the quarterback position, Brady outpaced all of them last season, leading the league in total passing yards (5,316) and touchdowns (43). He threw 12 interceptions.

The only other quarterback to throw for more than 5,000 yards last season was Justin Herbert of the Los Angeles Chargers. Herbert threw for 5,014 yards.

If the offensive line can be rebuilt, Tampa Bay should be in position to challenge for the NFL championship.

The receiving corps, which includes reliable veterans Chris Godwin and Mike Evans, has been bolstered by the recent addition of Julio Jones.

Even with an uncertain offensive line situation, Tampa Bay has remained among the favorites to capture the league title.

On Friday, FanDuel Sportsbook had the Buccaneers (+750) only behind the Buffalo Bills (+650) as the favorites to win this season’s Super Bowl.