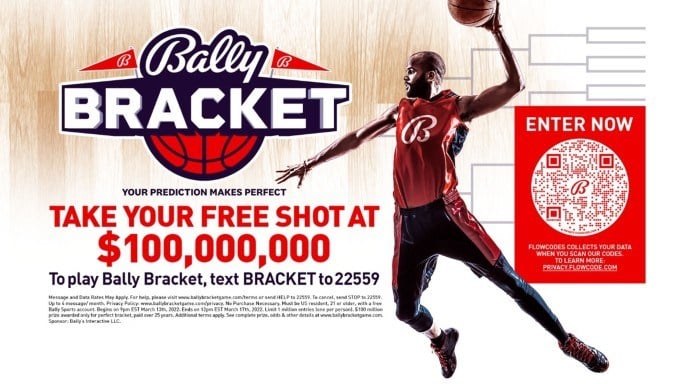 Bally’s Interactive announced Monday that it is launching “Bally Bracket” — a free-to-play game that will award a jackpot prize of $100 million to whoever can pick all 63 games of the NCAA Division I Men’s Basketball March Madness Tournament successfully.

The first two rounds of the 2022 March Madness tournament will be played across ten different cities, including Buffalo, NY. With online sports betting in New York now legal, sports enthusiasts will be happy to know that they can now bet legally on their favorites.

Beyond the grand prize, other prizes are given out at random. The prizes include the following amounts:

“The NCAA Tournament is always an enjoyable time of year as people gather to cheer on their favorite teams,” Adi Dhandhania, COO of North America for Bally’s Interactive, said in a news release. “Bally’s has been a brand synonymous with fun for decades, so we developed an engaging free-to-play game for fans to participate in and have an opportunity to win $100 million.

“We are excited about our partnership with Sinclair Broadcast Group and will be using their massive media footprint to promote the Bally Bracket game.”

Bally’s Interactive notes that the NCAAB tournament draws record crowds and television ratings and that no one has gotten all of the games correct since the field of teams expanded to 64 in 1985.

The closest anyone has ever gotten has been thwarted by the Sweet 16 round of play.

Bally’s Interactive is also partnered with Sinclair Broadcast Group. With that partnership, Bally’s Interactive will utilize it as a promotional channel for the $100 million grand prize contests, including sponsored segments on local television stations, Bally Sports regional sports networks, and “digital media sites” to keep viewers updated as the tournament progresses.

For those interested, registration for the contest begins today, and registration will close on March 17 when the first games tip-off.

The game will be hosted on ballybracketgame.com, ballysports.com/win, and players may enter by scanning the QR code on television segments or by texting BRACKET to BALLY (22559).

All eligible participants must be 21 years of age or older.